Mostly for our own entertainment, we’ve taken pictures of the various stages of what we’ve come to call our “Pool Room” project.. For those who’ve asked us how it turned out – and claimed they really would like to see a few pictures – here is the story.

Fall 2000 we began construction on the house addition we’ve come to call our Pool Room, meaning swimming, not billiards. We’ve long been fans of home exercise – mostly because that was just about the only way we’d actually get exercise done. So for a number of years we’ve quite regularly used our exercise bike, treadmill and ski machine. But Sara has always been a fan of swimming, and missed going to the pool (just not enough to actually go there anymore…). But we couldn’t see putting in an outdoor pool with all the expense, liability, etc, and then only be able to use it maybe 5 months of any year here in Kansas. Finally we discovered Endless Pools, which are small size counter-current pools in which you swim in place, indoors. Since April 2001 ours has beenup and running, and a great success.

Our new pool is just 8 feet by 15 feet on the outside (7′ by 14′ inside), and could have been installed, as is,  in our basement. But we decided we really wanted enough room for all our exercise equipment to be in one place, and to do that, we needed to add on a new room. Luckily the east side of our house was built with a large blank wall, against which we decided to add our new exercise room. We went to Winston Brown, a very good local construction company specializing in remodelling. Fortunately they were willing to take on not only the usual job of building on an added room, but also the much more unusual one of working with their very first counter-current pool. (Also Endless Pools is very diligent about working with local construction companies to make sure everything gets done right.)

Late autumn 2000, during the last good weather of the year, various workers got busy using large pieces of equipment – very skillfully – first to dig and then pour the foundation for our new room.

The foundation guys finished just in time, as the weather was turning very, very cold. The foundation then sat there until January 2001, when things got somewhat warmer – or at least less cold. Our intrepid framing crew then showed up, and got to work creating a room on top of our empty foundation. Just as we’ve always done whenever having anything built for us, we tended to get out and look almost every day, just to enjoy watching the project unfold. Below is a photo of Ron looking through a big window hold in the framed skeleton of the new room’s outer wall. You can see that the old outer wall still has its shingles (they came off once the windows were put in place and the room closed in. 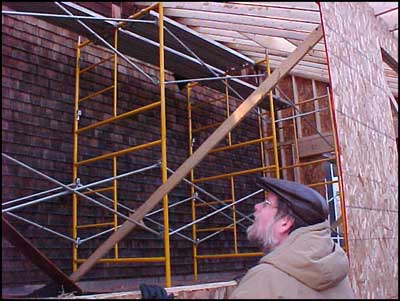 Once the framing was well under way, other people also got to work, setting up the heater, filters, and pumps needed to keep the pool warm and clean. These all sit on a platform in our basement, just across the original foundation wall from the new room. As the picture above shows, we were actually able to run all the pipes through the old basement window (now on the other side of the new foundation). Soon we had the shell of a new room, all connected to the house,  with drywall, windows and paint all done.

This brought us to pool assembly itself, starting with positioning steel side panels in the two-level pool hole made when the foundation was poured.

Once this was done, the pool interior was measured very exactly, and the dimensions sent off to the pool company, so that they could create a liner made to fit – again exactly – into the pool sides and bottom. Meanwhile work on the pool continued, as bright blue insulation panels were added and a rough wood edging framework built. Onto this our pre-fab coping was added; it is made of something that looks – and costs! – a lot like Corian. The pool cover itself was then added. It runs on tracks, is easy to crank open, and pulls closed easily. The company says it will hold the weight of an adult – and we know it will hold a cat, since Mrs Muir did eventually venture out onto it (very carefully). Finally a short wall framework was finished around the pool, and tile layed on the floor and up the short pool walls.  We were then only a pool liner away from actually having a pool that could hold water….

The pool liner arrived – as promised – within two weeks of the measurements being sent in, and our intrepid pool builders were soon at work installing it. The recommended method calls for glueing on lots of felt padding (no problem), hanging the liner from its top groove  and then smoothing out all liner wrinkles, using the weight of water to help the process along. Here is where we were really glad they were the ones doing it, since Bart the pool specialist a) had to stand in very icy water, and b) had to empty that water out several times as they had to reposition the liner, each time just a tiny bit, to get everything just right. Altogether this took several days, and included standing in very, very cold water during most of that time.

But eventually they prevailed, and we have a pool with an almost perfect, wrinkle-free liner. This done, they could carry in the very heavy propulsion unit that hangs in the pool and provides the actual current against which we now swim. 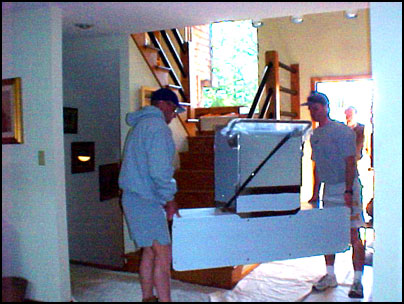 Carrying the propulsion unit – very carefully – into the house

The last step was then installing the pool benches (through which the water is also recirculated) and corner step, all of which was done standing in still very cold water. 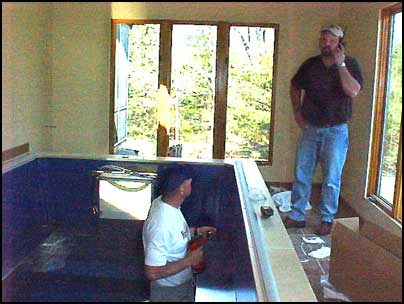 Bart installing the benches, while job boss Bob
Miller checks out some detail by phone

And with that, at last, we were done. The pool has been up and running now since April, and is a great success. We’ve moved in all our other exercise equipment and also got a decent exercise mat, since doing weights or stomach crunches on cold tile didn’t sound very inviting. We’ve also enjoyed playing around with what to put up on the shelves installed across the top of the windows – Sara particularly likes having a new place to show off her growing collection of folk art objects.

So far the result is a complete success. We use the pool mostly for swimming but sometimes also for aqua exercises, both of which work very well. It’s also great to have all the other equipment in one place, and we’ve since been motivated to upgrade both our treadmill and our exercise cycle, plus have added a weight set. 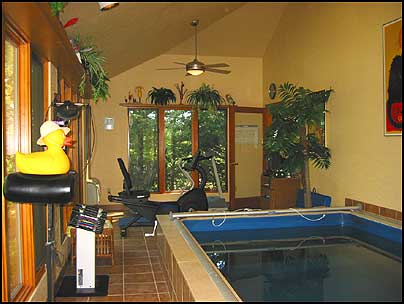 The upgraded exercise end of the pool room – note the
Nordic Traksports a friend (a rubber duckwe picked
up while in St. Louis)

We both love the view through our many windows, and especially being in the pool when the sun is coming in through our two skylights. Recently Mrs. Muir has taken to keeping us company as we work out, usually sitting on the director’s chair put there for her comfort, but sometimes getting right up on the rim of the pool and watching with great interest. As advertised, the pool is incredibly easy to keep algae-free. About once a week we glugg in around a cup of chlorox, and once every few months Ron tops up the pool using a short hose attached to the spiggot we had installed at one end. 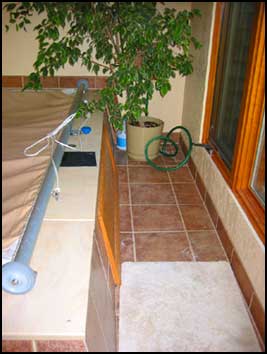 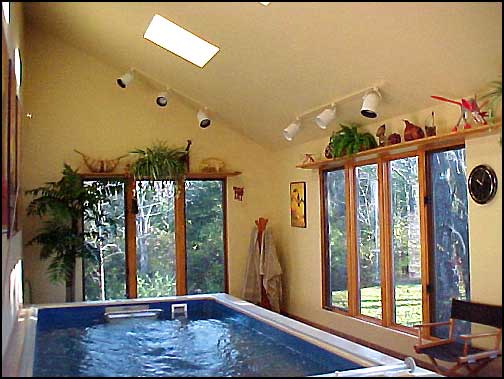 The finished room (photo from the end of November 2001)

Return to A Little About Me